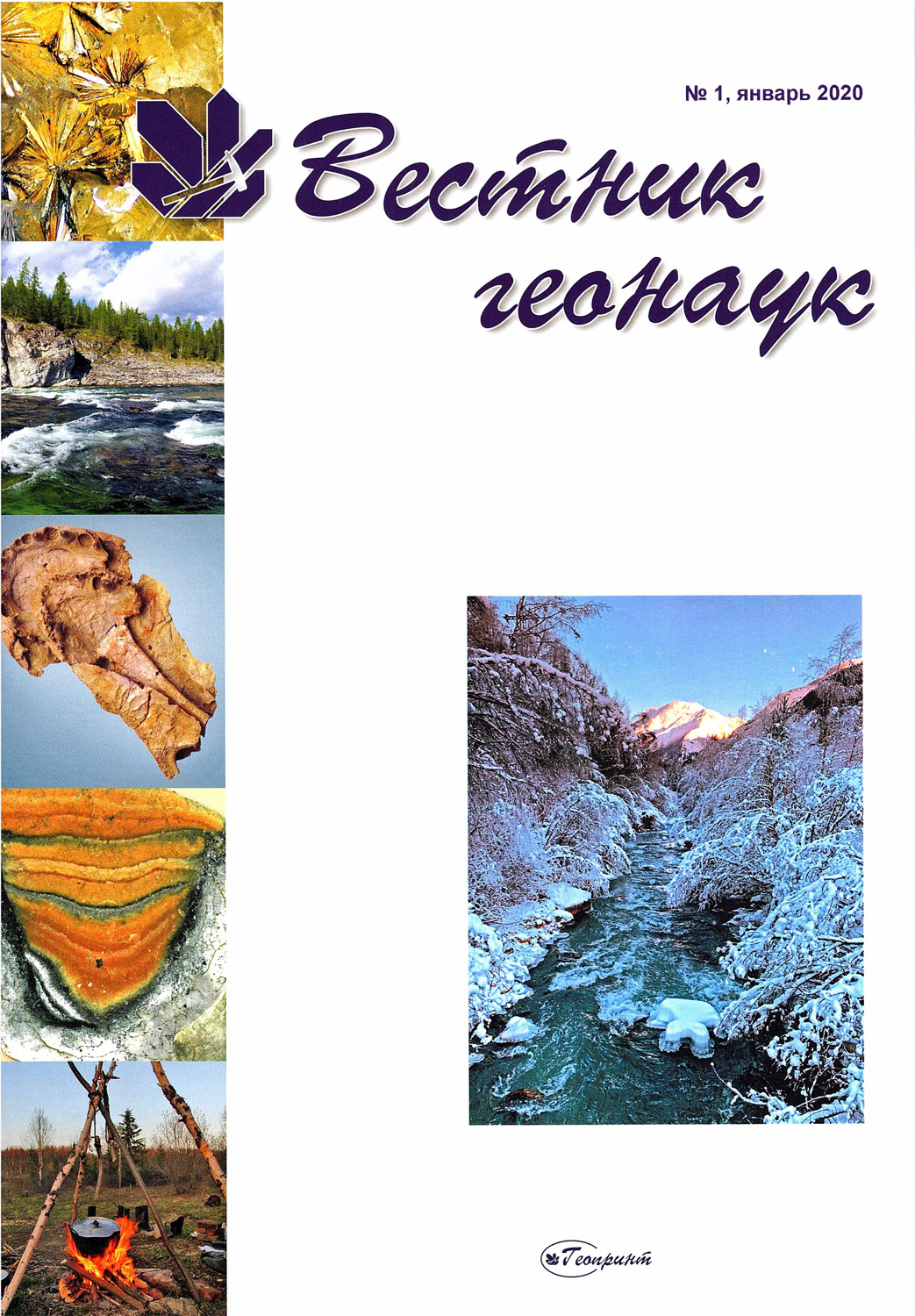 Detailed mineralogical studies of Malyutka massif rocks of the Khudolaz differentiated complex have been carried out. Firstly the chemical compositions of rock-forming and many accessory minerals have been identified and characterized. Based on the results of petrographic and mineralogical studies in the rock formation history the magmatic and post-magmatic (hydrothermal-metasomatic) stages were identified. The early cumulus (olivine-spinel pair 1074—1118 °C) and late intercumulus (hornblende-acid plagioclase pair 662—694 °C) magmatic stage minerals crystallization temperature by empirical geothermometers was estimated.

The rocks of massif were saturated by hornblende (33—47 vol. %). We concluded that massif was formed from water-saturated magma, divided from the cumulus horizon of a hypothetical deep magma chamber. Using the method of geochemical thermometry, the composition of the initial melt was determined, that matched magnesium-rich basalt with a temperature at the injection of about 1180 °C.

Phosphate sorption on leucoxene
A. V. Ponariadov, O. B. Kotova

Phosphate sorption on leucoxene
A. V. Ponariadov, O. B. Kotova

The sorption of phosphorus on the non-magnetic fraction of the gravity concentrate of ilmenite-leuсoxene ore (hereinafter, leucoxene) (Pizhemskoe deposit, Middle Timan, Russia) at a pH (1—12) of a sodium phosphate solution with a fixed phosphate concentration of about 0.01 mol/l, as well as sorption (pH = const) in the concentration range of 0.001—0.01 mol/l was studied. We presented a phosphate ion form adsorbed on leucoxene surface. At that we observed a shift of the zero point charge on the aggregate surface. The experiments has confirmed the idea that leucoxen is most likely the main geochemical barrier to phosphorus under conditions of hypergenesis.

This article is devoted to determining the mechanisms of development of landslides on the coastal slope of the Vorkuta river. The studied territory with a length of 400 meters is adjacent to the roadway of Shakhterskaya St. embankment in Vorkuta. The engineering-geological section of the slope is represented by loose, semi-rocky and rocky soils, therefore, simple and complex types of landslides are possible here. We used a three-axis accelerometer, which allowed registering an accelerogram with the possibility of further conversion into a cycle diagram and a seismogram of a microseismic event. In winter, freezing water, located in rock cracks, expands, as a result of which chips and microcracks appear, and the cyclic weathering process is accelerated. In loose rocks, an ambiguous sequence is observed: when water freezes in the sands, they are hardened, and in loams, clays and thin sands, due to the properties of high heaving, extrusion of the surrounding soil occurs simultaneously with hardening. In the layered section of the slope, a gradual redistribution of the stress forces occurs, where the total impact also helps to reduce the initial stability of the soil caused by the of creep of clays after thawing. These continuous changes are well recorded on accelerograms of seismic records displaying elastic (no transfer of matter) and inelastic processes (transfer of matter is carried out). In total, four types of phenomena were revealed on the slope: block, shear-slip, liquefaction-current, and the development of microcracks in rocky soil. In addition, we simulated experimental accelerograms and spectrograms, which are identical in shape to the accelerograms and spectrograms recorded on the real site of landslide movement.

Regularities of development of landsclide processes
in valley of Atachay river (Azerbaijan)
S. A. Tarikhazer

Regularities of development of landsclide processes
in valley of Atachay river (Azerbaijan)
S. A. Tarikhazer

Valley of the Atachay river is known for landslide processes. In connection with intensified in the 21st century tourist-recreational development of the north-eastern slope of the Greater Caucasus the landslide dislocations are intensified. Unfortunately, the recent studies of landslide processes in the study area were carried out in the 50s of the 20th century. The article gives a geomorphological description of the largest and most dangerous (Khalanj, Yukhary-Fyndygan, Bakhyshly) landslides in the valley of the Atachay river, and also the reasons for their formation are indicated, and measures to prevent them are proposed.

The 8th all-russian conference with international participation
«THE JURASSIC SYSTEM OF RUSSIA:
PROBLEMS OF STRATIGRAPHY AND PALEOGEOGRAPHY»